Beyoncé Giselle Knowles-Carter (/biːˈjɒnseɪ/; born September 4, 1981)[2][3][4] is an American singer, songwriter, dancer, and actress. Born and raised in Houston, Texas, Beyoncé performed in various singing and dancing competitions as a child. She rose to fame in the late 1990s as lead singer of the R&B girl-group Destiny's Child. Managed by her father, Mathew Knowles, the group became one of the world's best-selling girl groups in history. Their hiatus saw Beyoncé's theatrical film debut in Austin Powers in Goldmember (2002) and the release of her debut album, Dangerously in Love (2003). The album established her as a solo artist worldwide, earned five Grammy Awards, and featured the Billboard Hot 100 number one singles "Crazy in Love" and "Baby Boy".

Following the break-up of Destiny's Child in 2006, she released her second solo album, B'Day (2006), which contained the top ten singles "Déjà Vu", "Irreplaceable", and "Beautiful Liar". Beyoncé also continued her acting career, with starring roles in The Pink Panther(2006), Dreamgirls (2006), and Obsessed (2009). Her marriage to rapper Jay-Z and portrayal of Etta James in Cadillac Records (2008) influenced her third album, I Am... Sasha Fierce (2008), which saw the introduction of her alter-ego Sasha Fierce and earned a record-setting six Grammy Awards in 2010, including Song of the Year for "Single Ladies (Put a Ring on It)". Beyoncé took a hiatus from music in 2010 and took over management of her career; her fourth album 4 (2011) was subsequently mellower in tone, exploring 1970s funk, 1980s pop, and 1990s soul.[5] Her critically acclaimed fifth album, Beyoncé (2013), was distinguished from previous releases by its experimental production and exploration of darker themes. Her sixth album, Lemonade (2016), also received widespread critical acclaim, and subsequently became the best-selling album of 2016.[6]

Throughout her career, Beyoncé has sold an estimated 100 million records as a solo artist,[7] and a further 60 million records with the group Destiny's Child,[8][9] making her one of the best-selling music artists in history.[10][11] She has won 22 Grammy Awards and is the most nominated woman in the award's history. She is also the most awarded artist at the MTV Video Music Awards, with 24 wins.[12][13]The Recording Industry Association of America recognized Beyoncé as the Top Certified Artist in America during the 2000s (decade).[14][15] In 2009, Billboard named her the Top Radio Songs Artist of the Decade, the Top Female Artist of the 2000s (decade), and awarded her their Millennium Award in 2011.[19] In 2014, she became the highest-paid black musician in history and was listed among Time's 100 most influential people in the world for a second year in a row.[20] Forbes ranked her as the most powerful female in entertainment on their 2015 and 2017 lists,[21][22] and in 2016 she occupied the sixth place for Time's Person of the Year.[23] 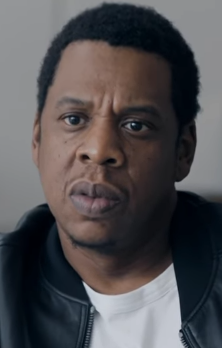 As an artist, Jay-Z holds the record for most number one albums by a solo artist on the US Billboard 200 with 14. He has also had four number ones on the Billboard Hot 100, one (" Empire State of Mind") as lead artist.
Original link
Wikipedia

Enter your email and we'll send you reset instructions